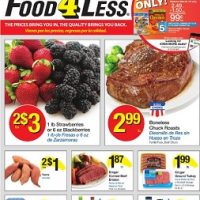 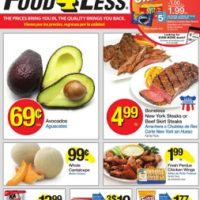 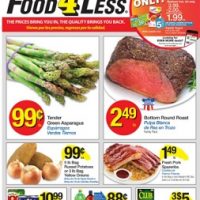 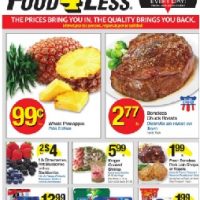 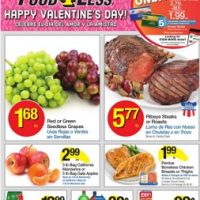 Food 4 Less is a national warehouse store grocery chain, currently owned by Kroger. It is a no-frills grocery store where the customers bag their own groceries at the checkout. Kroger operates Food 4 Less stores in California, Illinois, Indiana, Nebraska and Nevada. In markets that Kroger does not have the rights to the Food 4 Less name, it operates as Foods Company
There are other stores scattered throughout the United States with the Food 4 Less name, part of franchise agreements with various wholesalers, including Unified Western Grocers and Associated Wholesale Grocers Midwest. These stores have particular penetration in Oregon and central and northern California. The Food 4 Less name was previously used by Fleming Companies, Inc., but as Fleming exited various regions and ultimately collapsed, the rights to the name went to wholesalers who picked up some of Fleming’s former customers.
The Food-4-Less name and logo was originally conceived in the 1930s by Lou Falley, who developed a chain of stores both in the Food-4-Less name (with the warehouse/no frills format) and the Falley’s name. The Falley’s stores were full service supermarkets, while the Food-4-Less stores were warehouse stores, where labor costs were cut by having the groceries stocked to the shelves in the original cases, rather than stacking individual items. These stores were located throughout eastern Kansas and parts of northwestern Missouri. Over the years, the number of Falley’s store diminished, and were replaced with Food-4-Less stores. Falley’s also franchised Food 4 Less in states where it did not operate.
Ron Burkle’s Yucaipa Companies acquired Falley’s in 1987. In a period of consolidation for the grocery industry, Food 4 Less merged into Ralphs; Fred Meyer acquired Ralphs in 1997, and was acquired by Kroger a year later.
Source: www.wikipedia.org
If you are interested in knowing more about the company, its statements, products, and special offers or discounts, please visit www.food4less.com.
On iWeeklyAds you will find the latest Food 4 Less weekly ad and weekly circular, online, on a single place.